Guests will find Anita’s pastel portrait hanging on the main stairs. The eldest child of Sir Shane and Marjorie Leslie, Anita became a famed and prolific writer just like her father. She wrote entertaining biographies of many acclaimed figures including Paul Rodin, Sir Francis Chichester and Madame Tussaud.

She also wrote extensively about her famous relations, such as Leonard Jerome, Jennie Jerome, Randolph Churchill, Clare Sheridan, and her first husband Paul Rodzianko, an accomplished horseman. Her autobiographical works, entitled The Gilt and the Gingerbread and A Story Half Told: A Wartime Autobiography, capture the colour of her upbringing at Glaslough and her wartime career respectively. Her books are delightfully readable, perhaps because she apparently wrote them while enjoying a simple diet of smoked salmon and champagne!

When the war came in 1939, Anita joined the elite Mechanised Transport Corps, set up to provide ambulance drivers for the British Army in Egypt, and later the Free French Army in 1944, driving ambulances on the Front as the army battled to liberate Alsace and invade Germany. There she truly distinguished herself by rescuing wounded French soldiers from behind enemy lines. Perhaps her greatest moment was to liberate French prisoners from the terrible underground Nordhausen concentration camp, where they were systematically worked to death building V1 and V2 rockets for the bombardment of England.

At other various points during her wartime career she was editor of a Troops newspaper whilst based in Egypt, and also managed to smuggle herself in the boot of Field Marshal Harold Alexander’s car (Harold was a son of the 4th Earl of the nearby Caledon Estate and a childhood friend of Anita’s), so that she could illegally attend the Potsdam Conference between Churchill, Roosevelt and Stalin. At the end of the war, General de Gaulle awarded her two Croix de Guerre for her courage and she took part in Churchill’s victory parade in Berlin, where she also took advantage of the opportunity to hurriedly write letters home on the personalised stationery from Hitler’s office in the ruins of the Reich Chancellery!

After the war, she married Commander Bill King, who served as a World War II submarine commander and later completed a successful solo sailing circumnavigation around the world in the early 1970s. Anita took over Castle Leslie Estate from her brother Jack (affectionately remembered as Uncle Jack) in the late 1940s. She also bought and restored Oranmore Castle, a 15th century ruin in Galway, which she left to her children, Tarka and Leonie. In 1963, she passed Castle Leslie Estate to her younger brother Desmond.

When she died in 1985, according to her wishes, Anita was buried under the great trees on the far side of the lake, where the view of her childhood home was best. As her coffin was lowered, she sent a 100mph whirlwind across the lake to signal her safe arrival on that ‘other shore’.

Anita’s Room is home to a Pennsylvania Dutch sideboard, which is adorned with the self portraits and very biblical names of the Honeybourne family. It also offers stunning views of the magnificent trees to the front of Castle Leslie that can be seen from the window. This stunning scenery demonstrates why the estate is one of the foremost Monaghan hotels. 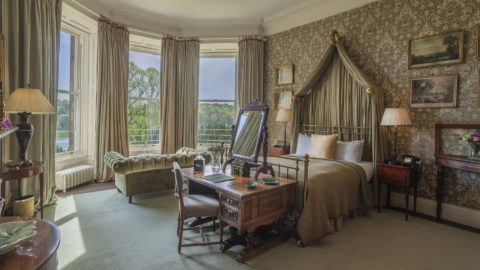 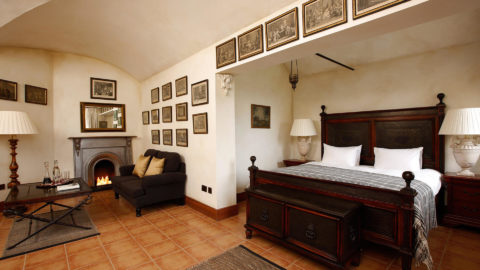 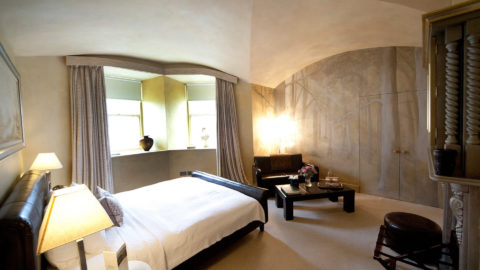 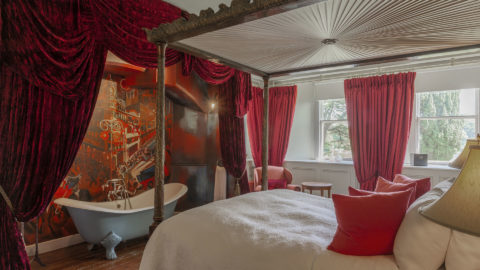